Bobblehead promotions have been around for more than sixteen years but they won’t be going away anytime soon. Â Giveaways featuring the quirky nodding dolls are still the most popular promotion among sports teams everywhere. Â In fact, ESPN reported that the 2015 Major League Baseball season included a whopping 121 different bobble giveaways, ranging from a “talking” Harry Doyle (Bob Eucker’s character from the film ‘Major League’) to aÂ Jonathan LucroyÂ doll with a green light saber in his hand on “Star Wars” night in Milwaukee.

One of my favorite variations of the popular giveaway is a bobblehead that commemorates a specific moment. Â One that captures a moment and pays tribute in a fun and unique way. Â A great example is an upcoming promotion hosted by Georgia State University when the men’s basketball team will distribute bobbleheads that replicate the moment the team’s head coach fell off his chair during one of the more memorable moments of last season’s March Madness. Â Promotions like these go above and beyond the traditional bobblehead by connecting a promotional item to an event that invokes memories and connects fans to the emotions they felt “in the moment.”

In a similar fashion, the Sacramento Kings this year will host several bobblehead promotions, each commemorating a significant moment in the franchise’s history.

This year the Kansas City Royals offered a bobble promotion featuring a figurine of Lorenzo Cain, commemorating his second of two back-to-back diving catches during Game 3 of the American League Division Series versus the Angels. This bobblehead lies on the grass with gloved hand outstretched. Â Promotions like this can help extend the excitement felt by fans as a team makes a deep post-season run while cementing that moment in history as fans inevitably display the figures on their desks at work, home offices, “man caves” or anywhere else they choose to put their team pride on display. 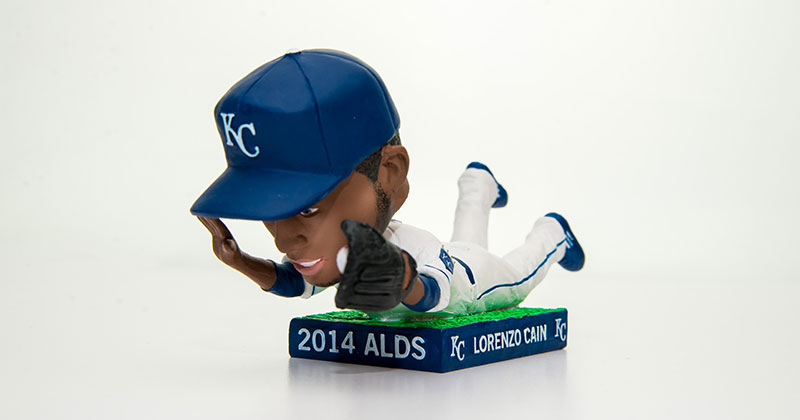 So, for all the high school sports marketers out there, could your school do this? Â What moment could you commemorate? Â Who could you pay tribute to that your fans, the students and your community would be excited about? Â How would you promote the event? Â Would a ticket purchase be required to get a bobblehead? Â Would you sell them in your school or team store? Â How could you maximize the publicity generated by the event to build enthusiasm for your school sports and fan support / student spirit?

Bobbleheads are a promotional item that invites creativity so give it some thought and have fun with it!