Skip to primary content
While the majority of football fans today will discuss the possibilities of Peyton Manning riding off into the sunset, favorite commercials and the halftime performances, marketers are busy analyzing the overall impact on brands. Â So, which brands won the Super Bowl? Â Here is a recap of what the experts are saying about the performance of advertisers, sponsors and social media campaignsâ€¦

AdWeek also examined which Super Bowl ads â€œresonatedâ€ with viewers.
ClickÂ hereÂ to see which spots created the most chatter.

More from USA Today AdMeterâ€¦clickÂ hereÂ to see the voting for most underrated spots from Super Bowl 50, the top five worst ads and much more.
Postano.comÂ tracked the â€œperformanceâ€ of the Super Bowl commercials and offers a fantastic breakdown (and some cool graphics) of Sundayâ€™s ads. Â ClickÂ hereÂ to view the analysis as well as every single ad from the big game.

Looking for a little more â€œsubstanceâ€ for ad analysis? Â Kellogg MBA students at Northwestern have you covered. Â They have established a ratings system using six specific criteria. Â Based on their evaluation, squarespace scored an â€œFâ€ as the worst ad that aired during Super Bowl 50 while six brands drew â€œAâ€ grades as the best spots. Â ClickÂ hereÂ for a full breakdown.

Super Bowl Ratings
Why do advertisers spend $5 million for just 30 seconds of air time during the Super Bowl? Â Commercials that air during the big game are the most talked about ads all year. Â They generate buzz on social media and attract consumer attention which can often lead to increased engagement. Â But ultimately, the hefty price tag is the byproduct of advertising during the most-watched television program of the year (and in recent years, the most-watched in history). Â So how did the ratings score for Super Bowl 50? 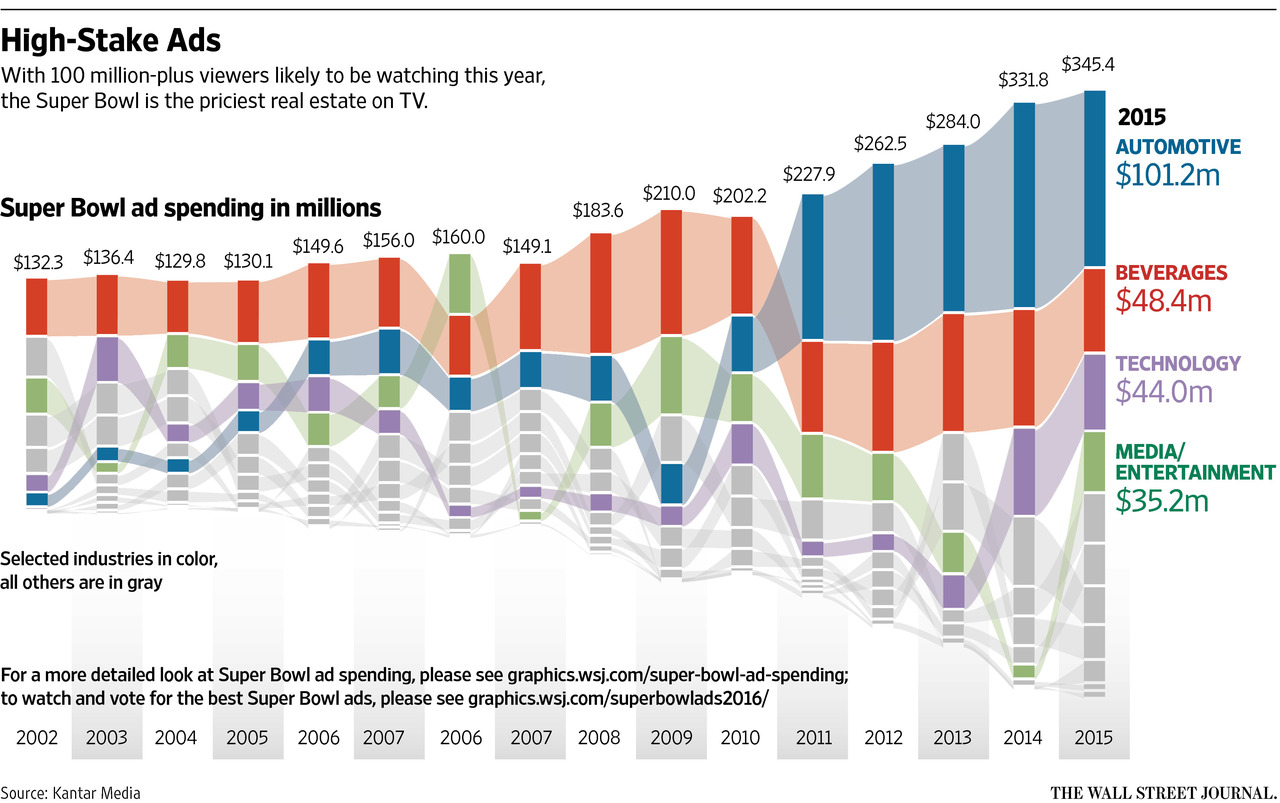 The preliminary numbers are in. Â Although it isnâ€™t a new ratings record, last nightâ€™s game garnered a 49 rating. Â Thatâ€™s slightly off from last yearâ€™s Super Bowl, but a HUGE number either way. Â Early estimates suggest the total audience tuning in could still surpass the record number of viewers from last year.

As for the broadcast, how did CBS do? Â Sports Illustrated offers a breakdown of the networkâ€™s broadcast performance. Â ClickÂ hereÂ to read the story.

One way to determine the effectiveness of Super Bowl ads is the reaction through social media channels. Â Commercials that generate a lot of online activity are often considered a â€œwinâ€ by most standards, but sometimes that buzz can be to the brandâ€™s detriment. Â This yearâ€™s biggest brand losers, based on social media response, appear to be the drug companies. Â Ads about constipation apparently donâ€™t resonate with Super Bowl viewers.

Overall, how do we determine the value of an advertisement through social media channels? Â ForbesÂ published the â€œeValueâ€ rankings determined by Engagement Labs, a social media analysis firm. Â The system measures social media response to determine its impact and then assigns a grade to each ad. Â According to its rankings, TurboTax, Avocados from Mexico and Pokemon all earned the highest grades via Facebook, Twitter and Instagram engagement.

Overall,Â iSpotTVÂ declared Hyundai the overall brand winner on Super Bowl Sunday, with 13% of â€œearned digital activityâ€, 130,000 social actions and more than eight million online views. Â However,Â PR agency WE used its â€œBrand Agility Indexâ€ to crown Heinz as the clear Super Bowl 50 winner becauseÂ because it was the most viewed and created the most engagement in terms of conversation by volume.

45% of advertisers included hashtags in their advertisements this year, down just slightly from the 50% of commercials that featured a hashtag last year. Â Marketingland.comÂ has the full breakdown through their annual #Hashtagbowl social media scoreboard. Â ClickÂ hereÂ to see the results.

On Twitter, it is clear that the real winner of the Super Bowl from a social perspective is Esurance. Â They were the most-mentioned brand during the Super Bowl but didnâ€™t need to spend $5 million on a commercial during the broadcast to engage fans (they did run pre and post-game spots). Â Instead, the brand managed to engage fans through a sweepstakes promotion, one of the few companies to hold a â€œcontestâ€ this year. Â By strategically positioning the sweepstakes promotion in a pre-game ad spot, Esurance brilliantly set themselves up to build engagement throughout the game. Â According toÂ Adweek, the brand was generating 9,000 tweets through the first quarter alone.

Score one for Adidas. Â Broncosâ€™ defensive star Von Miller became one of the gameâ€™s biggest stars with an amazing performance throughout the post season, capped off by capturing the Super Bowl MVP award, doing so while wearing Adidas.

All of Peyton Manningâ€™s sponsors also scored big, but perhaps none more than Budweiser. Â In a somewhat bizarre In a post-game interview with CBSâ€™s Tracy Wolfson, the star QB said he planned toÂ â€œdrink a lot of Budweiserâ€ to celebrate the Super Bowl victory. Â But hereâ€™s the catch. Â Budweiser didnâ€™t pay Manning for the shout outâ€¦a shout out that carried aÂ reportedÂ $3 million plus in media value.

Meanwhile, Cam Newtonâ€™s ascension to one of the leagueâ€™s best players (and MVP this year) has also made him one of the most marketable. Brands like Gatorade, Under Armour and Beats by Dre have most certainly benefited all season from their affiliation with the star quarterback. Â Unfortunately for those same sponsors, Camâ€™s post-game interview has become a lightning rod for criticism. Â As a result, they missed out on a great opportunity for added exposure. Â So while Peyton Manning went the extra mile to provide added visibility for the brands he represents, Cam failed to recognize the importance of positive brand support and the role he plays as an ambassador.