Tickets to the first ever Super Bowl (Super Bowl I) cost $12. Â How much did a draft beer at last year’s big game at University of Phoenix Stadium in Arizona cost? Â You guessed it. $12. Â (via DailyBeast)

The NFL distributes 17.5% of available tickets to each participating team (Denver and Carolina)â€¦the league keeps 25% and the host team (San Francisco 49ers) receive 5% of the overall inventory

â€‹33,000 seats went unsold for Super Bowl I in 1967. Â It was the only Super Bowl in history that didn’t result in a sellout. Â According toÂ wikipedia: “Super Bowl I was the only Super Bowl in history that was not a sellout in terms of attendance, despite a TVÂ blackoutÂ in the Los Angeles area (at the time, NFL games were required to be blacked out in the market of origin, even if it was a neutral site game and if it sold out). Of the 94,000-seat capacity in the Coliseum, 33,000 went unsold.Â Days before the game, local newspapers printed editorials about what they viewed as a then-exorbitant $12 price for tickets, and wrote stories about how viewers could pull in the game from stations in distant markets such asÂ Bakersfield,Â Santa BarbaraÂ andÂ San Diego.”

Nearly 4 million fans combined have walked through the turnstiles to watch the Super Bowl over the years. Â Super Bowl I was the lowest attended game in history while Super Bowl XIV in 1980 between the Los Angeles Rams and Pittsburgh Steelers drew a crowd of 103,985 at the Rose Bowl.

â€‹Capacity at Levi’s Stadium in Santa Clara, home to this years Super Bowl, is 68,500. Â Even with a sellout, it would rank as the 5thÂ lowestÂ attended Super Bowl in history. Â However, the state-of-the-art facility is expandable to approximately 75,000 to host major events like concerts, theÂ Super BowlÂ and theÂ FIFA World Cup. In fact, on June 27, 2015, The Grateful Dead Fare Thee Well Tour made history by extending the stadium to 83,000 in attendance.

The average attendance for a Super Bowl is nearly 78,000.

In 2014, Levi Strauss & Co. reached an agreement to put the brand’s name on the stadium in Santa Clara at a cost of $220 million. Â As a result, this year’s Super Bowl will be played at Levi’s Stadium.

According to sportingcharts.com, there was a group referred to as the â€œNever Miss a Super Bowl Clubâ€, which as the title suggests is comprised of people who have attended every single Super Bowl event. As of Super Bowl XLVII, this group consisted of just three people – Steelers fan Thomas Henschel, 49ers fan Larry Jacobson and Patriots fan Don Crisman.

According to nbcnews.com, there are about 35,000 hotel rooms in the San Francisco/Santa Clara/Silicon Valley area. Â Compare that to the 100,000 rooms that were available in the New York/New Jersey area when they hosted the 2014 Super Bowl.

At the time of this writing, Priceline had a “special discount” room at the Hyatt Regency in Santa Clara available for $2,097 for anyone looking in need of lodging the night before the Big Game.

The cost of a 30-second TV commercial for Super Bowl XLIX in 2015 set a record at a cost of $4.5 million. Â A new record will likely be set yet again this year with 30 second spots reportedly selling for a whopping $5 million, a $2 million increase from five years ago when spots sold for $3 million.

What else could you get for $5 million? Â The fine folks at gocompare.com have some suggestions. Â Rather than spending on a 30 second Super Bowl spot, you could buy anything from 2,008,032 bags of Skittles candy to 52,148 years worth of Netflix subscription services.

Last year’s Big Game between the New England Patriots and Seattle Seahawks drew an average of 114.4 million viewers, making it the most watched telecast EVER. Â That’s an increase of almost 8 million viewers from the 2011 Super Bowl broadcast which set a record at the time with 106.5 million fans tuning in to watch the Green Bay Packers and Pittsburgh Steelers.

When did viewership peak during last year’s Super Bowl? Â At halftime, of course. Â An estimated 118 million fans watched as Katy Perry performed with Lenny Kravitz and Missy Elliot for the most-watched SB halftime show in history. Â To put that into perspective, that is nearly four times the number of people that watched last year’s Grammy’s award show.

This year, Beyonce will perform after public outcry persuaded Super Bowl officials to add her to the show along with originally scheduled performers, Coldplay. Â (via forbes.com)

Super Bowl performers do not earn a penny for their appearance during the halftime show.

In fact, it has been reported that the NFL has angled for an arrangement in the past that would provide financial compensation to the league for the right to perform at halftime.

â€‹Not that performing during the Super Bowl halftime doesn’t yield dividends. Â According to Billboard, Bruno Mars sold 15,000 copies of his record Unorthodox Jukebox in the week prior to the Super Bowl. Â During Super Bowl week, that number jumped to 42,000. Â The week following his performance during the Big Game? Â Sales reached 81,000 (source: Â billboard.com).

Three years ago, it was reported that Pepsi reached a deal with the NFL that would provide them sponsorship rights to the Super Bowl halftime show at “upwards” of $7 million per year.

According to variety.com, last year only 18 of the 70 plus Super Bowl advertisers included their commercials online for NBCâ€™s game broadcast. Â In selling this yearâ€™s game, CBS required all sponsors to run ads in the digital stream as well as the TV broadcast.

According to the National Chicken Council, consumers will eat an unbelievable 1.3 BILLION chicken wings during Super Bowl 50, or enough for every single person in the U.S. to enjoy four wings each. Â That is also enough wings to put more than 600 on every seat in all 32 NFL stadiums.

The Super Bowl is the busiest day of the year for pizza sales. Dominoâ€™s Pizza estimates it will sell 11 million slices on Super Bowl Sunday.

Holy guacamole! Â According to the The Hass Avocado Board, an estimated 270 million avocados will be eaten during Super Bowl festivities this year (which would be a new record).

The week of the Super Bowl in 2015, sales of refrigerated dips increased nearly 48% (compared with Â the prior week), according to data from market research firmÂ IRI, while sales of barbecue sauce increased nearly 41%, cream cheese went up about 30% and processed cheese up about 19%. (source: marketwatch.com)

The average American consumes 2,400 calories on Super Bowl Sunday, making it the second-biggest eating day of the year, after Thanksgiving.

7-Eleven reports a 20 percent rise in antacid sales the day after the Super Bowl.

Each year EA Sports releases the results of its Super Bowl simulation to predict the game’s final score. Â If EA Sports predicts the game correctly this year, it will bring the accuracy of theÂ Madden NFLÂ simulator up to 76%. Â They have correctly predicted the Super Bowl winner in 9 of the previous 13 seasons.

Butterfinger is offering up to $50,000 to cover the fines for any player participating in the Super Bowl incurs for an excessive celebration penalty. Â The league, of course, is not happy about this and has suggested the brand is deploying an ambush marketing tactic (via businessinsider.com).

Last yearâ€™s Super Bowl winner, the New England Patriots, were said to receive the largest and most expensive Super Bowl rings ever made. Each ring reportedly cost $36,500, and 150 rings were purchased for the players, coaching staff and others in the franchise, totaling a cool $5.5 million. Most Super Bowl rings are rumored to cost about $5,000.

Fans of the Browns, Lions, Jaguars and Texans have never had an opportunity to root for their team in the Super Bowl because they are the only franchises that have yet to make an appearance in the big game.

By contrast,Â Cowboys, Steelers, Patriots and Broncos fans have seen their team appear in the Super Bowl eight different times.

Super Bowl 50 marks the first (and only) time that the NFL will abandon the Roman Numeral designation for the game. Â Next year’s game will be known as Super Bowl LI.

â€‹According to aÂ PwCÂ study, Super Bowl 50 is projected to generate more than $220 million in direct revenue for the Bay Area from the NFL, fans, businesses and members of the media. Â That would be the highest ever for a Super Bowl.

According to the National Retail Federation, Millennials (specifically those ages 25 toÂ 34) will outspend every other age group on Super Bowl Sunday by a wide margin, shelling out an average of $140 each on game day items, compared with an overall average spend of $82. (source: market watch.com)

Also according to NRF data,Â Denver Broncos and Carolina Panthers fans are planning on purchasing up to 20.9 million new pieces of team/league merchandise.

Forbesestimates this year’s Super Bowl will generate “at least” $620 million in revenue (a figure that includes revenue from media advertising, licensing and sponsorships, tickets and concessions).

According to the American Gaming Association., a casino trade group, Americans will wager an estimated $4.2 billion on the Super Bowl this week, most of it illegally. (source: latimes.com) 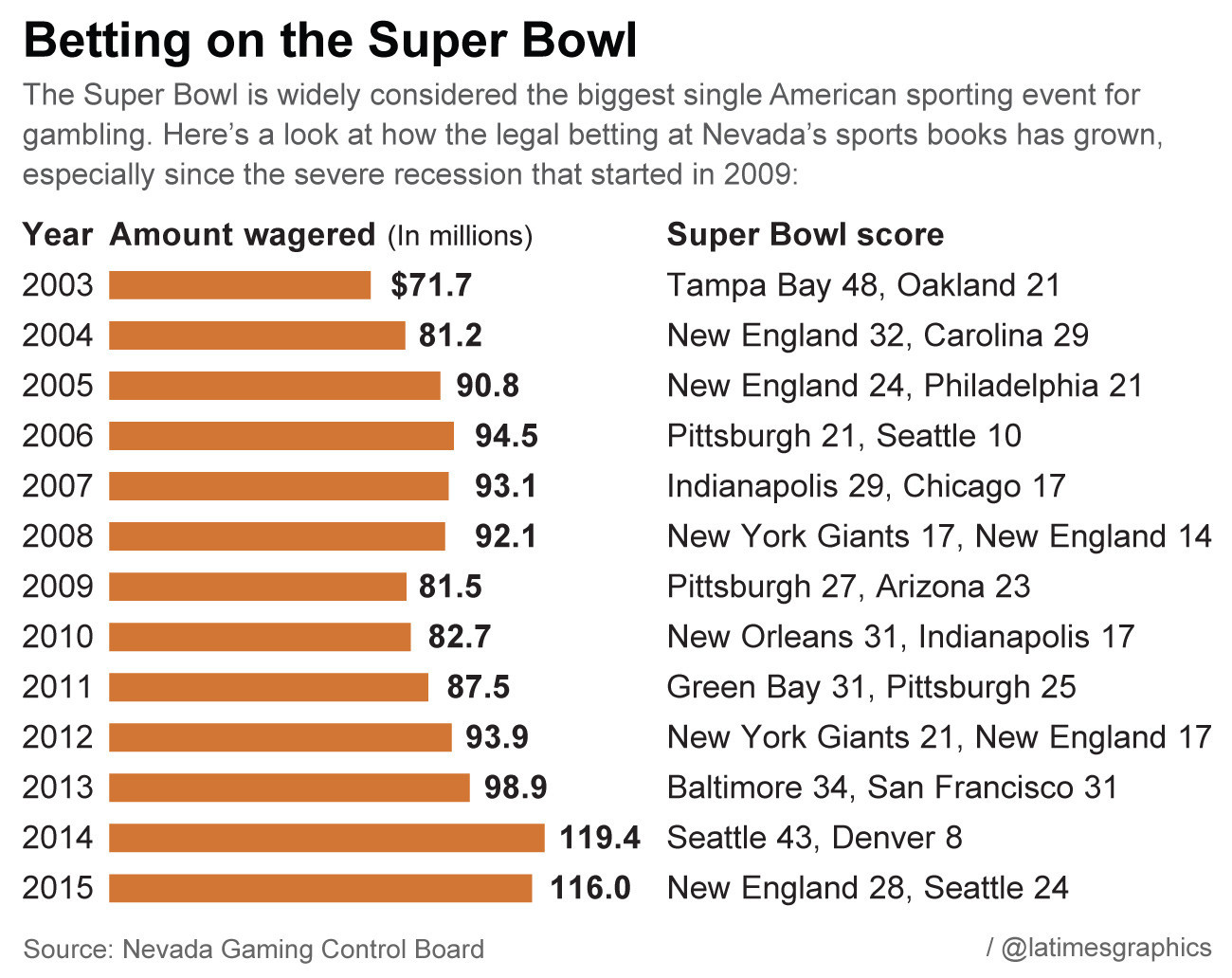