Shanghai starts construction on $898 million e-sports arena, as it pushes to be world gaming capital

Shanghai has broken ground on a major e-sports events hub as the city pushes to become the leader in competitive gaming. E-sports refers to competitive video gaming which is growing quickly globally. Over the past few years, e-sports tournaments have managed to pack out large stadiums with fans flocking to

The NBA is sorely in need of a cash infusion. Billions of dollars in revenue have been lost, and with no clear point at which fans will safely be able to return to arenas, even more profits are expected to go down the drain. A possible solution that has been

The Milwaukee Bucks credited a boost in merchandise sales to Giannis Antetokounmpo. Just moments after the National Basketball Association’s reigning MVP posted on his Instagram account that he’s staying with the team until at least 2026, the “Giannis effect” went into overdrive, especially around a critical asset. Click here to

IOC President ‘Very Confident’ Tokyo Olympics Will Allow Spectators, Will Not Be Further Delayed For Covid-19

The rescheduled Tokyo Olympics are set to kick off with the Opening Ceremony on July 23, 2021, giving organizers some eight months to assess the safety of doing so as Covid-19, the disease caused by the novel coronavirus, continues to spread. Click here to read the story at forbes.com. Discussion

What happens to Masters merchandise when there are no fans? (CE)

The 2020 rendition of the Masters will mark many firsts, but the most stark reminder that we are truly witnessing a tournament unlike any other (besides the November date and fall foliage) is the absence of patrons, to use the club’s parlance for the estimated 40,000 spectators who roam the

What happens to Masters merchandise when there are no fans?

The 2020 rendition of the Masters will mark many firsts, but the most stark reminder that we are truly witnessing a tournament unlike any other (besides the November date and fall foliage) is the absence of patrons, to use the club’s parlance for the estimated 40,000 spectators who roam the 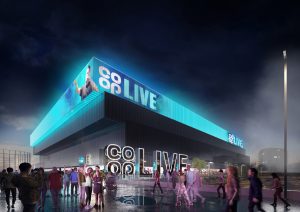 We have a name for the recently green-lit Manchester arena: Co-op Live, as Oak View Group (OVG) partners with Co-op, the largest consumer co-operative in the United Kingdom. The Co-op has become a major player in the UK’s music scene, with pop-up shops at events like the Glastonbury Festival. It’s also synonymous with Manchester, opening

No fans? An athletes bubble? How the 2021 Olympic Games might look

Japan’s Olympic Minister insists the rearranged Tokyo2020 Games must be held “at any cost”, while the International Olympic Committee says only that it is committed to delivering a safe event.  But with less than a year before the July 23-Aug. 8 Games are due to start, the hugest of question

According to an economic impact report published by the Miami Super Bowl host committee and seen by the South Florida Business Journal, that was more than double the amount generated for the region when Miami last hosted the National Football League’s (NFL) champion-crowning game in 2010. Click here to read the story

Promo of the year? 😂

we hosted our first ever @PetSmart Puppy Race at halftime, and it did not go as planned. it was even better.😂

thanks to @IndyHumane for letting us show off these adorable pups that are all on hold waiting to get big enough to go to their forever homes.☺️